by Ladson I. Geddings

Burtis Chapman (B.C.) Bridges’ son, Dave Bridges, was going through his father’s old boxes that he had simply packed away years before when his father died.  He came across some old music manuscripts, complete with instrumental band parts.  Dave noticed that one piece, the “1915 March,” carried the subheading: “For the Grass Valley Band,” written when his father was only 23 years old.  Being curious, Dave investigated.

When Dave got to the Nevada County Concert Band’s website, he couldn’t believe it.  There on the Heritage page was his father’s picture, second row, third from the left, holding a clarinet. 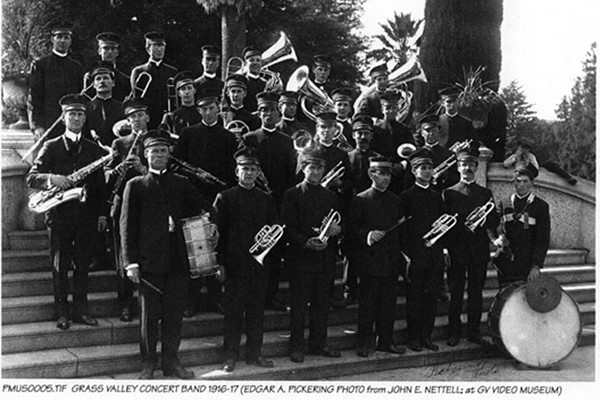 The composer, B.C. Bridges was born in 1892 here in Nevada City, in a house his father, Edwin D. Bridges (E.D.), built on Red Dog Road.  Today that location is at the corner of Red Dog Road and Bridges Lane, which used to be the driveway to E.D.'s shop and barn.  The old granite foundation and granite steps that he made leading to the cellar are still there.  E.D. was a stonemason and made many monuments in Pine Grove Cemetery and granite curbs that were used in Nevada City.

B.C. was tutored at home by his mother Anna.  She apparently gave him quite a start in music, literature, and art as well as the three R's.  When she passed away in 1905, B.C. then went to public school, attending the Nevada City Grammar School from the 5th to the 8th grade.

With an early start in music, it is believed he played piano for the silent films at the local theater.  B.C.’s interest in music continued when he joined the original Grass Valley Band where he played the clarinet.  The band evidently was quite accomplished, as they won first place at the State Fair in Sacramento three years in a row, beating out the Nevada City Band for top honors.

He later was employed by the Alameda Police Department as a patrolman.  While working as a policeman, he was approached by his management to help solve a major problem.  The Department had a very important suspect they wanted to photograph, but nobody there knew how to work the big old plate camera.  Somebody said B.C. Bridges knew about photography, and so the chief called him in.  After he finished the picture, it turned out so well that the Chief asked if he would like to work inside in the Identification Department.  He took the job and the Department gave him an office with a dark room in a closet that was filled from floor to ceiling with ID cards and old photographs.  He straightened up the place, set up a file system, and went to work.  He got some books on the science of fingerprinting and identification to study for his new job.

However, he was disappointed with the illustrations in the books, and found it was very difficult to read the instructions or follow the descriptions.  While gaining the necessary expertise in fingerprinting, he wrote a better book on the subject.  When it was published, it became the World’s official textbook on fingerprinting.  B.C. went on to teach summer courses in Criminology at U. C. Berkeley, and was a consultant for an applied science college in Chicago.  He was very talented in many fields.  He wrote short stories for a series of magazines, wrote a book of poems, and drew very nice pictures and portraits of people.  B.C. passed away in 1968 in Alameda, CA.

B.C. Bridges composed two marches and four songs of the 1915's to 1920's era.  As best we know, none were ever published.  The “1915 March” was sent to the Nevada County Concert Band by B.C.’s son Dave and edited by the band's director, Cheryl Woldseth.  That arrangement was premiered on July 23, 2006 at Pioneer Park in Nevada City, California to a very appreciative audience.  It continues to be in the band’s repertoire, and is often used as an encore at concerts.

After a long absence, B.C.’s music has been returned back to his home town of Grass Valley.

CLICK HERE to listen to the Nevada County Concert Band’s first performance of the 1915 March at the “Step in Time” concert on July 23, 2006.

Click here for information on the Concert and a live recording of the "1915 March"
(follow the links under "EVENTS" to the "STEP IN TIME CONCERT.")